An acoustic live session took place for Rix FM in Stockholm.
Kim and her band performed the following songs:

Report of the day by Calanor

The day began with me going to the album signing, being held at Åhlens City in downtown Stockholm. I was a little surprised by the amount of people who'd gathered by the time I arrived - the music section is not terribly big, so it got a bit crowded in places. Around 2pm, Kim arrived, which in the far back of the queue where I happened to be was obvious from the applause and flashing cameras. Fast-forward past the not terribly exciting waiting in line, and it's my turn to get my items signed. Or so I thought, till a somewhat sullen guard instructed me to bring only one single item with me. Oh well, said and done, I approached the table behind which Kim's sitting and that's about the time when my mind flat-lined. In a matter of seconds, I turned into this nervous kid who couldn't for the life of him remember what he'd planned to say. Kim kindly put up with my staring, however. Hopefully I will be able to retain my senses a tad better the next time around...

Some five hours later, I meet up with another Swedish fan, Lasse, and we take off together to "Hotellet", where the Rix FM showcase will be held. As we're rather early, we spend the next one and a half hours getting acquainted with each other over a few pints, while of course discussing what lies ahead. The gig would take place in the downstairs nightclub section of "Hotellet" and I noticed that quite a lot of the people who were there to watch the gig seemed to be younger than I'd expected. After a lot of 80s stuff booming out of the speakers (including, of course, Kim), it's finally getting 9 in the evening and the gig is about to start.

Ricki enters with the rest of the band and takes a seat on the rather small stage next to the dance floor. He then announces that he'd like to introduce us to his sister, whereupon Kim - with the help of some guards I am sure - manages to make her way through the crowd up to the stage. Looking absolutely radiant in front of the enthusiastic crowd, she and the band start this completely acoustic gig with "Together We Belong". It immediately became clear that even though this might be an acoustic gig, Kim and the band intended to rock the place. Kim was full of energy, and quite obviously happy to be there on the stage, something that I think could be said about Ricki and the rest of the guys as well.

The gig continued with acoustic, and I would say without exception excellent, versions of "You Came", "I Fly", "Baby Obey Me", "Four Letter Word", "Maybe I'm Crazy", "Perfect Girl", and finally "Kids". The songs were most likely performed in that order - however, it must be noted that both Lasse and I were apparently so caught up in it all that neither of us seemed to think about "trivial" matters, such as in which order the songs actually were being performed...
In-between many of the songs, Kim talked a bit to the audience in her friendly, charismatic manner or exchanged some light-hearted banter with Ricki. The small scale of the showcase, with perhaps around 200 people present, along with Kim's natural charm made this gig more personal than you might normally expect.

All-in-all, it was an unforgettable evening and an example of Kim at her best. Kim's performance was pretty much flawless and the acoustic arrangements worked surprisingly well. Apparently, there were some minor technical issues, as Kim and Ricki both pointed out to the audio engineer that they had some problems hearing themselves, but this wasn't anything I noticed while I was headbanging in the middle of the crowd.

Kim ended the gig by saying that it's great to be back. Well, Kim, it great to have you back! Thank you, and all of those around you who made this gig possible, for a great evening! 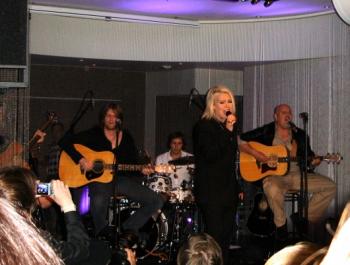 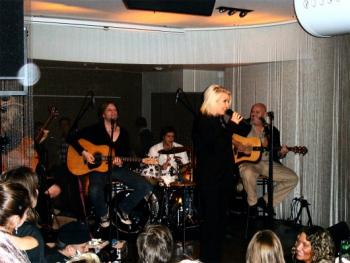