Kim Wilde appeared on the Elmi Show on Radio Regenbogen, Mannheim (Germany) to be interviewed and to play a few of her favourite songs. Songs that were played at Kim's request were:

Songs by Kim Wilde that were played during the hour:
I fly and You keep me hangin' on. 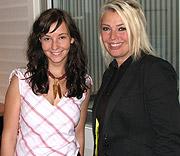