Kim Wilde is one of the guests during this breakfast news programme. She is interviewed about the 'Dig your dinner' campaign, which promotes the use of organic seeds all across the UK.

Good morning to you. Lovely to see you.
Lovely to be here. It's a great day, the sun's out, it's very exciting isn't it, all the gardening out there thinking 'woooo'. Planting some seeds.

Excuse the ignorance, it's planting time now, isn't it? That's what we should be worrying about.
Absolutely, spring is the traditional time to plant seeds and I'm involved in a 'Dig your dinner' campaign to get the nation, I mean we are a nation of gardeners... Perhaps there are people out there watching who've never planted a seed and so you know perhaps this spring they could do so! And if I can do it, anyone can do it. (Laughs)

Well a lot of people say 'I can't plant a seed, I haven't got a garden'.
Well that's very true, I mean you can have containers. You can plant in containers. You can plant on a window sill, grow tomatoes and herbs. And also the Dig your dinner campaign is flagging up some varieties who are in danger of becoming extinct. These varieties are living antiques. They've been with us for generations and although you can buy them in your local nurseries heirloom varieties, there are a number that are actually in danger of becoming extinct. There are three of them here: this is the Jay's pea, which apparently originates in Luton, which is very exciting because I'm gonna plant that because I live just down the road from Luton.

So the climate will be right for there.
That kindof makes some sense. If it's survived hundreds of years til now, and originated in Luton, it should do well in Codicote, this is what I'm thinking. And there's an onion here, Rousham onion, I haven't grown this one before but I've received these seeds from Garden Organic, the UK's leading organic growing charity and that's the only way you can get these seeds because these are not on the national seedlist, so you have to become a member of Garden Organic in order to receive these. But to support seeds that are in danger of becoming extinct you should support heirloom varieties.

Are they easy to grow as well? I mean, you've got onions there for example but it's not something I would naturally be planting in my garden. It's quite small, but are these onions easy to grow?
Well they are. I always say if I can do it, anyone can do it. I'll probably be sowing them inside when I get home today and then I'll put them out after the frost at the end of May. But actually you can direct sow them, I plant in raised beds and they warm up quicker than the ground.

You see, some of us don't particularly feel green-fingered. Thinking 'Oh, is this soil right, is the light right, enough water, too much water...'
I know, it is a vast subject and I would say with the campaign, why not start small? When I started I really jumped in the deep end. And I planted everything in sight. It was overwhelming. Great fun, but I would say start off small, pick three seeds that you really like the look of, fancy growing some peas perhaps, or some salad leaves, which will grow well in containers, outside your kitchen door...

You can't go too wrong, can you? Potting stuff, and then water occasionally and if it comes up, fine, if it doesn't well you haven't lost too much?
The world will not end if a seed does not come up. And I think once you sow a seed... I defy anyone having done it once not to feel motivated and do it again. So if they go to digyourdinner.co.uk website they can get lots of great tips about how to get started this spring.

We've been talking about paving over front gardens. Which would seem a pity for you, I think?
It does, absolutely. I think, you know, promoting a space for wildlife, to encourage wildlife that helps the garden, gardening organically, gardening with plants, creating little havens for our environment. We're a nation that can really make a big impact on the nation's health and environment just in our little gardens.

Kim, let's take you back for a moment to your former career.
(Laughs) Do we have to?

You had a record with a record. You were, until recently, the last female British artist to have a number 1 in America with 'Kids in America'. There you are. Leona Lewis has... You had that spot for, what, 25 years?
Well something like that. I know, it's absolutely fantastic for her, you know. Let's be very proud of that girl, she's such a talent and I can't think of anyone better to take that mantle away from me.

And it proves how difficult it is as well, when it's taken that long for a British female artist to do it, doesn't it?
It does. I mean the market was very different then, in 1983 or -4 when I had that hit with a cover version of 'You keep me hangin' on' and it was very different then. I don't think the Americans generally got that Eighties sound. But I think our markets have merged a lot more now and there's less differences between the American music scene and the British music scene.

'You keep me hangin' on' was the number 1, not 'Kids in America', is that right?
That's correct, yeah, a cover version of 'Hangin' on'.

The one that I always remember is 'Kids in America'.
Good on you, yeah. 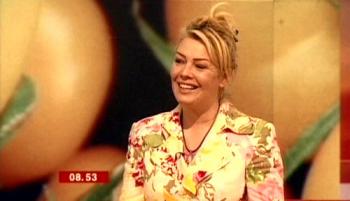 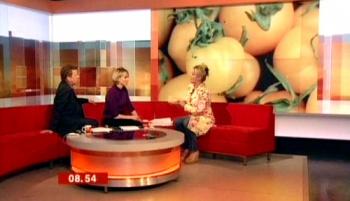 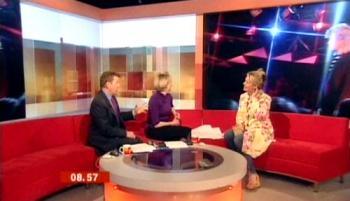 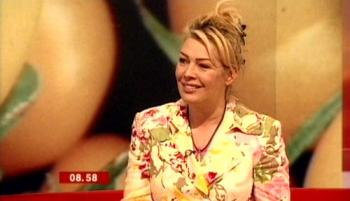