Half hour programme about Kim Wilde, filmed on November 11, 2007 in Bremen before Kim's concert at the Aladin. The programme starts with an introduction by two presenters and a video of "Jesamine" by the Casuals. The two presenters then look back on Kim's career, starting out in 1981. Part of the 1982 interview in Zoom is shown. Then the March 1981 performance of Kids in America in Musikladen follows.
Kim Wilde is then interviewed. She tells about her memories of Musik Laden and how she works with her family nowadays.
Then part of the April 1982 performance of View from a bridge in Musikladen is shown. Then Kim is asked what was so special about the music of the 80's and, while she is wearing a Clash t-shirt, whether she is a fan of that band. She is, and a clip of 'London calling' by the Clash is shown.
Kim says that from her own songs, 'You came' is her favourite and has been for quite some time. Part of the live rehearsal of 'You came' is shown.
After one question about her popularity amongst boys, the December 1981 performance of 'Cambodia' in Musikladen is shown.
After talking about the musical Tommy for a little while, a video of The Who's 'Pinball Wizard' is shown.
Then Kim is interviewed about her other passion, gardening. When asked about her plans for the future Kim says that it's going to revolve around music.
The final video in the programme is the June 1981 performance of Chequered love in Musikladen. 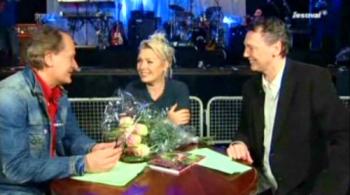 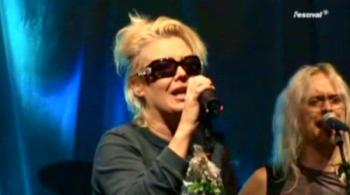 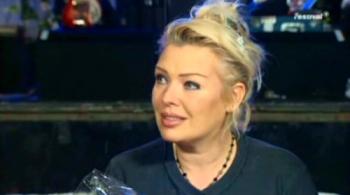 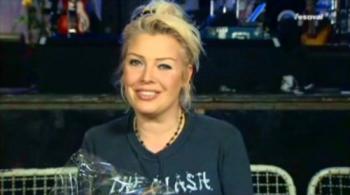